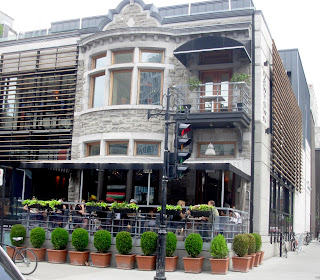 The rehearsal dinner--on the second floor of this building. 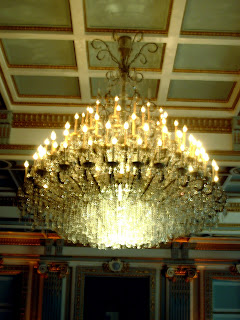 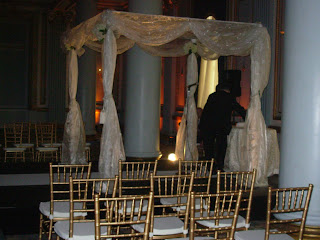 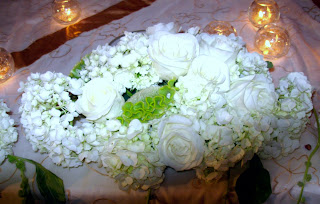 Flowers around the edge of tables (center pieces were additional). 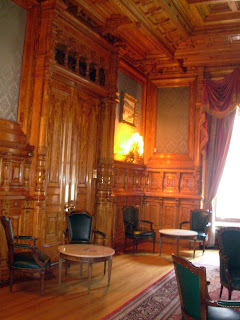 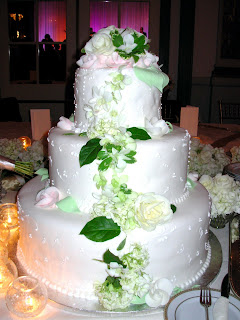 My cousin's son got married in Montreal this weekend, Normally I would have passed up on this wedding as my cousin and I have not been close for years, but my mom's death made me rethink some family issues and we decided to attend.

My cousin Judy was sent to a fancy college to find a rich husband. The one she found became a doctor with a lucrative practice. Her snobbery built an impenetrable wall to our friendship. In spite of this, she was there for me when my mom died and at the unveiling. My mom and Judy's mom were sisters, extremely close sisters and my mom's death hit my aunt very hard. I know that my presence at this wedding was a special gift to this 85 year old lady.

Now, to the wedding. We arrived around noon on Saturday, after leaving NY at 5:30 in the morning. The drive only took about six hours. We figured a plane, with all the waiting around would take almost as long. (We got lucky--going home the weather was terrible and all the flights out were cancelled. No one flying got home until the next day. We treated ourselves to staying at one of the recommended hotels --Omni. The room was magnificent. The service impeccable. We joined their select club (free) and had coffee and juice delivered to the room every morning.

Saturday night there was a big rehearsal dinner. Only about 200 guests showed up there. It was on the second floor of a downtown restaurant. The food and drinks went on for hours. Every time you put down your wine cup, someone filled it up. Sunday was the big day. There must have been over 300 guests at the Windsor Hotel , which was Canada's first grand hotel. The wedding began at 5:30 and ended at 1:30 in the morning. The rabbi was flown in from New Jersey and there was a cantor as well. There were sixteen attendants in the bridal party. The flowers were breathtaking and the food might have been some of the best I have ever eaten. When the eight piece band stopped playing around 1:00 AM a DJ took over. As if all this wasn't enough, the celebration continued Monday at the Mount Stephen Club. (The Mount Stephen Club was originally a men's club that did not allow Jews. It is now owned by two Jews and has a kosher kitchen.) The kosher brunch included two omelet stations, crepes, french toast, lox, sable, fruit, bagels, etc, etc etc.

Judy's daughter is getting married soon. Judy will try to make this wedding even bigger. For me, it will be local so we will miss all the smaller parties, but that is fine. We had a great time. Both the bride and the grooms family have a lot of money so the extravagant wedding was well within their budgets but it still seemed a bit extreme to me. Still, I am glad to have been a part of it and will cherish its memory. I wish the young couple a lifetime of happiness together.
Posted by Pissedoffteacher at 4:02 PM

I will never forget the posts while your mother was sick.

How are you doing?

WOW....This while story is reeking with jealousy...how sad among close family members...i never thought adults had such courage to put into words such blatant envy

We are planning a weddig and would love to know where the Rehearsal dinner location was? I would so appreciate if you could email me at schorrdaniel@aol.com
Thank you!!!