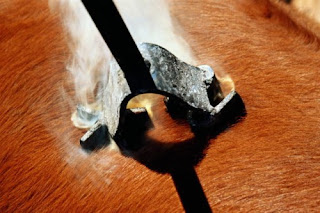 From Bizarre News:
You don't see these old-fashioned values much any more. There is a big hoopla in Mount Vernon, Ohio about a public school teacher who preached his Christian beliefs despite complaints by other teachers and administrators. Mount Vernon Middle School teacher John Freshwater also taught creationism in his science class and was insubordinate in failing to remove a Bible and other religious materials from his classroom. But it wasn't enough that he tried to burn the fear of God into their little heathen souls, he wanted to burn it into their flesh, too. Freshwater used a science tool known as a high-frequency generator to burn images of a cross on students' arms in December. Freshwater told investigators he simply was trying to demonstrate the device on several students and described the images as an "X," not a cross. But pictures show the images depict a cross. A friend of Freshwater defended him, saying, "With the ex- ception of the cross-burning episode... I believe John Freshwater is teaching the values of the parents in the Mount Vernon school district."
Posted by Pissedoffteacher at 8:07 AM

This is indeed bizarre!

When I read this, words truly failed me. This teacher should be fired, no question in my mind.

I love the comment from the guy's friend. "With the ex- ception of the cross-burning episode... I believe John Freshwater is teaching the values of the parents in the Mount Vernon school district." Thats like saying with the exception of him killing people, Jeffery Dahmer was an alright guy. Who burns their students?? I know I have thought about it, but never actually did it! CRAZY!

This guy should be locked up and kept far away from any children.