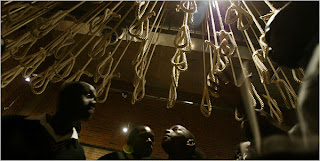 This was taken from another blogger but it is important for everyone to read.
THE WHITE TREE: OLD HATRED IN THE DEEP SOUTH

During the past two years a saga has been unfolding in the small town of Jena, La., that harkens back to an era that the United States would like to think has long gone by. An era marked, in this small community, by violent and grotesque hate crimes and inequality, a time when Black Louisianans were taught to stay in their place or pay the consequences. Sadly it seems that time has passed by unnoticed in this rural southern town, which still clings to the “old” southern way of life. Blacks and Whites do not socialize, and racism is regarded casually as a natural part of life.

The story that proceeds is one that seems out of place in an era when we have a Black democratic contender for the Oval Office. It is a sobering reminder that old ways run deep, and hate and fear do not fade away easily, especially in the Deep South. Unfair trials, intimidation and notions of White Supremacy still deeply affect people of color living in this sleepy Louisiana town, which has recently been rocked by international news coverage.

On August 31, 2006, a small group of Black students asked permission from their school board to sit under the schoolyard tree, dubbed the White Tree. The White Tree was so named because of an unspoken rule that, since the school’s inception, barred Black students from enjoying its shade. The school board told the kids they could sit anywhere they want. However, the next day when the students arrived to school the tree was adorned with three nooses; two of the nooses were black and one was gold—the school colors. To White residents, the noose was nothing more than a tasteless prank. But to the Black community, it was a threat and a harkening back to the times of public lynching and burnings.

The racial tension ran high between White and Black students of Jena High in the days that followed. The school board’s decision to lessen the punishment of the boys involved in putting up the nooses to a simple slap on the wrist—three days suspension instead of the recommended permanent expulsion—only exacerbated the tensions. The school board dismissed the hanging of the nooses as a harmless “prank,” and the superintendent told the Chicago Tribune that “adolescents play pranks…I don’t think it was a threat against anybody.” The harmless “prank” was not taken so lightly by the Black community of Jena. Perhaps it is because of Jena’s not so “harmless” past. Jena’s dark past is no secret, the racism is not veiled. If you search Google images for “Jena Louisiana”, the first two pages contain photos of lynching, burnings, and Klansmen.

Journalists visiting Jena have been dumbfounded by the racial separations in the town. However, most White residents in Jena are strangely adamant about not being racist. “I don’t think we are racist here,” said barbershop owner Billy Doughty, “We never talk about race.” But Doughty has never cut a Black man’s hair, and he never will—something he tells his occasional would-be Black client. “I don’t cut Black hair. I don’t think it’s racist. I just don’t do it,” he explains. Caseptla Bailey, a Black mother whose son is facing attempted murder charges, explains that “[Jena] is very racist and they don’t even try to hide it. It’s like, stay in your place or else.”

On September 6, Black students staged an impromptu sit in under the “White Tree” to protest the light punishment given to the students who hung the nooses. A school assembly was quickly convened. Surrounded by White police officers, the White District Attorney General, Reed Walters, warned the Black protestors that if they did not stop making a fuss over this “innocent prank…I can make your lives disappear with the stroke of my pen,” implying the filing of maximum or death sentences against the Black students involved.

The events that followed blatantly show the extreme hatred, fear, and institutionalized racism that dogs citizens of color in Jena. About three months after the noose incident, a Black student was assaulted by a group of White students as he entered an all-White party held at a locale called the Fair Barn. The victim was assaulted by White students and struck unaware in the face and then beaten with beer bottles and punches until adults intervened. There is no documentary evidence that any of the White students were ever charged.

On December 4, 2006, a few days after this event, during lunch hour at school, the same boy that was beaten at the Fair Barn party was verbally assaulted by one of his attackers. The White boy used the N-word, and taunted the boy for getting his “ass-whipped” at the party over the weekend. The White boy was also close friends with the boys who hung the nooses. An altercation ensued, with the White boy reportedly being knocked to the floor by a group of six boys, although only three of the six boys charged were actually involved, and rendered unconscious. The victim, Justin Barker, was in the hospital for three hours before being released and attending a school ring ceremony that evening.

The boys involved in the attack were arrested in under an hour and charged with aggravated assault and premeditated aggravated assault. Then, in an astonishing move, District Attorney Reed Walters, the same man who threatened to “wipe [their] lives out,” upgraded the charges against the alleged attackers to conspiracy to commit second-degree murder and attempted second-degree murder.

On June 28, 2007, Mychal Bell, the first young man to stand trial, was found guilty by an all-White jury and a White judge of second degree battery and conspiracy to commit second degree battery. All witnesses called were White and many of them had close ties with the District Attorney and the victim’s family. He will be sentenced on July 31. He could face up to 22 years in jail. After the ruling, Edna Thompson, a longtime friend of the Bells, was quoted as saying that “the best thing, if you’re Black in this town, is to stay out of the system, because once they get you, you’re done for. You’re not getting out.”

It is imperative that these six Black youth are not tried in Jena, La., as the town has proved itself unfit to provide them with a fair trial. The local community has been organizing and there has been international attention and outcry regarding the unfair treatment of these young men. They have their whole lives ahead of them. Bell is a star athlete who had offers from UCLA and other top schools. A racist, small-town community should not have the power to ruin their prospects for a happy and prosperous future.

Get Involved!—Write, email, or call one of these local organizations:

I am glad to see your post on the Jena Six. We need to be activists around this issue, one blogger at a time.

There is not much more I can do--this and send a check....I hope more people see it, link to it and send checks also. I can't believe we are allowing that stuff is going on in the 21st century.

This is a chilling story, though it doesn't surprise me greatly. I've known many white Southerners who speak out of both sides of their mouths when it comes to race.

Thanks Pissed Off. I will lend my support and post this to my blog ASAP. Amen Ms. Whatsit. I grew up in the South and can attest to what you said. In my home town, there is still a (now unofficial) black cemetery on one side of the road and a white cemetery on the other. And a former classmate who died while we were both in the 9th grade is buried there in that "white" cemetery. This occured in the early 90's. How sad.

Thanks for sharing this heartbreaking story. It is astounding that in some parts of the South it is still the "old" South that has no respect for civil rights; it might as well be 1964 Mississippi where three well meaning young men died by means of the local version of "justice": Andrew Goodman, James Chaney, and Michael Schwerner.
This situation reminds me of that time when I was an impressionable idealistic high school student, and I closely followed their heartbreaking story from Neshoba County, Miss. following the discovery of their car in a bog. I stumbled upon this passage written by Ben Chaney: "James Chaney was my brother. He and Michael Schwerner and Andrew Goodman were committed to the belief that this country and its constitutional privileges are guarantees that all of us-regardless of color, sex, or religion-have a right to participate in our great demo-cratic process and we all have a right to be treated fairly under the law. It is time that we dedicate ourselves and make a firm commitment to the success of the struggle and the preservation of our liberties by securing justice now so that future generations will not have to live in fear."

Ben Chaney is the founder and president of The James Earl Chaney Foundation. His brother, James Chaney, a civil rights worker, was murdered by the Ku Klux Klan along with Michael Schwerner and Andrew Goodman.

FYI: By going to the following site, you can grab a banner to place on your blog:http://automaticpreference.wordpress.com/jena-six-banner-link-html-code/