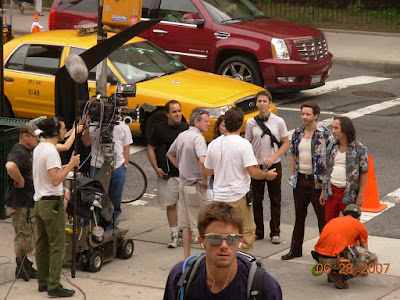 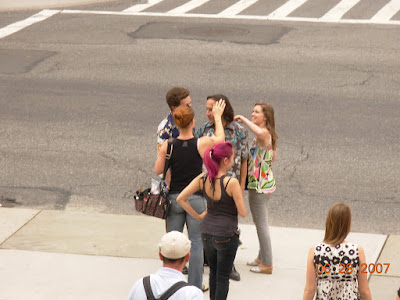 I love NYC and I love being on vacation. Last week I headed down to the Met to see an exhibit on fashion (nothing memorable or even stuff I liked. I can't even remember the designer's name.) I also saw an exhibit on Islamic art and Venice which was great. Since Venice is my all time number one city to visit, this exhibit was really special to me. I even got to watch some movie being filmed while I waited for my friend. The pictures are ones I took while I watched.

After the exhibit, my friend and I walked uptown, looking for a place to have lunch. On the way to the Museum of the City of New York. On the way, we were stopped by a young girl working for HRC.org. Being a typical New Yorker I quickly answered no thanks and kept walking. After a few steps, her announcement that she was working for Gay rights made me stop. I believe in equality for all and wanted to support her cause. Of course, the first thing she asked me for was a credit card, to which I answered no. Then she wanted a hundred dollar check. Again, I said no and then said, "how about $5 cash?" She said "Of course. Thanks. Thanks for treating me like a human being. Most people are rude and just keep walking." I told her I am glad there are people like her working for equality. Where would I be if no one got me the right to vote years ago?

We found a nice little coffee shop for lunch and then kept walking north to the museum. You really see the neighborhoods change as you cross certain streets in Manhattan. That is one of the things I love about the city.

When we finally got to the museum, we found real treats. My friend, a person born and bred in Manhattan, and an avid museum goer had somehow missed that museum her entire life. We of course began in the basement, with the bathrooms. That is my favorite wing because that is where they house the old fire engines that I remember from my childhood. Unfortunately, they are being taken out of the museum while the museum undergoes renovations. The top floor holds Rockefeller rooms (nice!) There is a floor with old toys from the early to the mid 20th century and a great old doll house. My favorite on this floor is a beautiful doll house. We went to the museum to see an exhibit on Broadway theater. There were costume sketches and an entire room related to the theater and the NYC influence on it. They even had puppets from Avenue Q, one of my favorite plays. The second floor has an exhibit on the Jewish newspaper The Forward, which was a mainstay of Jewish immigrants in NYC for years. The advice columns were the best. the first floor holds the museum's main attraction at the moment, baseball, something neither one of us were interested in. I would recommend it to anyone who loves baseball, just based on everything I have ever seen at that museum it has to be great.

After the museum we walked down Madison Ave, stopping for gelato at a place that rivals any of the places I had gelato in Italy. Finally at 53 and 5th I got on the subway to go home to Queens. Unfortunately, the Queens trains were not running (good old Bloomberg better really enforce his commuter driving tax--the subways are so wonderful.) I then took the V downtown to a stop that allowed me to switch over to an uptown F, a pain, but did nothing to devalue the day.

I look forward to more of these adventures this summer. They are the little things that keep me going. I love NYC. I can't imagine living anywhere else.
Posted by Pissedoffteacher at 5:03 PM

Your post put me in mind of the visit my family and I made to NYC in July of 2001. It was my first visit, and now that I am a retired teacher, I'm hoping to return soon, preferably in the fall, when the temperatures we experienced during our visit(about 100 degrees) will have passed for another year.

What a great city you live in!

Man! I am jealous! I hope to get to NYC sometime in the next couple of years, I went in junior high but its not the same. Nothing exciting ever happens in rural Nevada at all. Happy vacation by the way...

I lived on Long Island in late 80s, and I remember days like this. Man, do I miss the musuems!