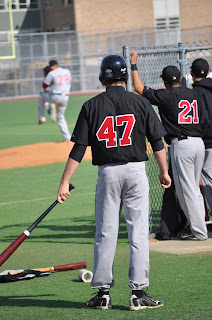 ﻿
Roy was faced with a dilemma in high school.  He could continue taking pre calculus or stay on the baseball team.  The team was a priority, studying wasn't.  Roy could have managed both but there was a strong negative correlation between the length of the season and his grades.

Roy wasn't thinking about college and his future when he made the decision to drop math.  The prom was coming up and the school would not let him attend if he failed math.  He decided he was too borderline to stay and did the only logical thing a teen could do.  He opted out of the difficult situation.  The school did not object.  With Roy gone, the probability of higher stats was inevitable.

Fast forward five years and Roy is now a college student.  He regrets his high school decision and is angry at the adults that went along with his choice.  He realizes now what a sham high school was and knows he was cheated out of a real education.   Roy is luckier than most.  He is bright and has a strong work ethic.  Baseball, once important has no relevance in his life today.  He doesn't even play anymore.  It might take him longer, but he will make it.  Others won't have his success.
Posted by Pissedoffteacher at 9:01 PM

Labels: sham called high school, where education does not count

Another success for BloomKlein. As usual, their policies are "Children Last". Always. Money or not gentlemen, your legacy will be cemented, you will rot in hell.

Football player's Dad called and said he is a mechanic and makes more money than I do, so if he didn't have to take Advanced Algebra, then his son can drop it...Oy...wonder where that kid is today...