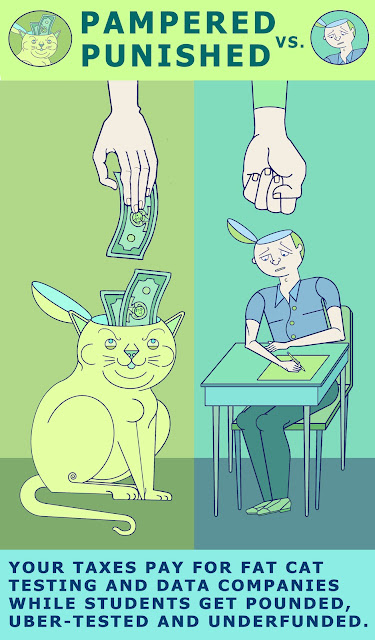 Yes, no school district seems to worry about cutting tests when discussing cutting their budgets.

If the federal government were to invest in public education as much as it does in maintaining laws that permit off shore tax havens, expensive war compaigns to democratize countries lke Afghanistan, a monopoly on drug selling by American-only pharmaceutical companies, bail outs on Wall Street, testing and data collection systems, and tax systems that shield the rich from paying their fair share, then imagine who we would be and how our society would be set up. Yet it is clear how inequitable and economically fascist the United States has become.

But the fight is not over. . . . it has just been resurrected. It's just the beginning, and I predict horrendous but perhaps essential civil unrest. May that never come true, as it did with the LA riots years ago.