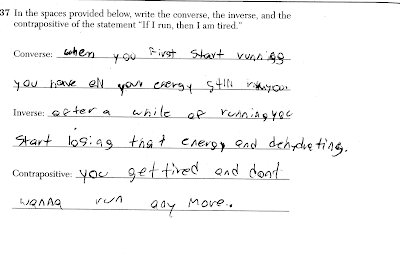 (from a Math A exam)


The math A regents is a joke. The cut off to pass gets lower and lower every term. Of course, there are some hard problems. The key is that you can get a 90 or better on the exam and not even attempt these problems. These problems are added to make the exam look valid. Even the hardest problem--graphing a parabola and a circle is not difficult using a graphing calculator.


Math A does not teach math. It is such a hodgepodge course that kids can get through it without knowing how to factor ore even solve an equation. They can pass by working backwards from the multiple choice questions. I am ashamed to admit that I taught a group of kids who had only passed one math course in four years how to pass the regents.

I tutored a bright, albeit somewhat lazy boy for the math B regents. His mom was thrilled that he got a 76 when he took math A and figured he could do the same on the B exam. The boy expected to be able to pass just from the multiple choice. It took me quite a while to convince him that was not true and that he really had to know the material in order to pass this exam.

The math B exam this year was difficult, and required understanding of mathematics. But, the cut off to pass was low. (Not as low as math A, but still low.) The problem with the exam is that some of the questions were so difficult, that some of the kids gave up during the exam. I heard that more than a few were crying. The kids have no way of knowing, while they are doing this exam, what the passing grade will be. The only thing they know is that the exam is hard and that there are too many problems that they cannot do.

Years ago, the regents exam was the culmination of a years work. Teachers knew the topics that would be on the exam and knew how to prepare the kids for the exam. Grades were usually not a surprise and teachers felt pride when they saw their students succeeding. Now, the exam covers a year and a half of material and there is no way of knowing what will be tested and what won't. Of course bright kids do well on the exam, no matter what. It is the average kid that struggles.

Kids should be able to think. They should be able to do more than just spit back material they have been taught, but regents should test what has been taught. The math regents are a farce. Passing, failing, means nothing. I used to like the regents exams. I felt they kept up standards. Now, they only serve as data for some meaningless reports that say our kids are doing better (or not.)
Posted by Pissedoffteacher at 4:09 PM

I teach one class of Regents Earth Science, and fortunately, the exam still actually is the culmination of a year's hard work. BUT, every year, I get looks from administration because I don't have as many kids scoring at mastery level as the Math A teacher. I long ago gave up trying to explain it to them, and this post confirms everything I already knew.

Thanks! I feel vindicated.

Ben Lindeman, one of State Ed's old Math Associates, from back in the day...

he just posted to the AMTNYS listserve that the calls the Math A "the exam" because he really can't call it a Regents...

The science exams are much more difficult than the math--no comparison and there should be no expectations of equal grades.

You know, I missed the image you scanned.

We had a winner, too. A semi-truant, for the converse, wrote: "I don't like to run"

I think the B and Physics are the hardest two left, followed by Chem.