Hopefully On The Mend 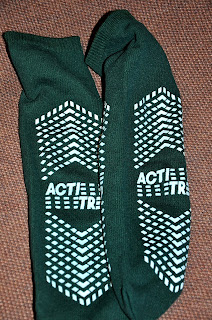 I took an MRI last week which showed I needed an epidural cortisone shot.  The pain doctor told me he would tell me exactly what was going to happen at each stage.  Saying I was scared, would be an understatement.  I've had epidural's before and I know one wong move could mean paralysis.  I was also scared that it wouldn't work.  The thought of living the rest of my life in this much pain petrifies me.

Things went fine in the beginning but as soon as he started administering the medicine, the pain started.  He didn't tell me it would be that bad.  It only lasted very short time, but it was intense as the medicine made its way through my body.  I had an image of the problem starting all over again.  He said the pain was a sign that he got the right spot, he said it was a very good sign.


It could take between 2 - 7 days for the full effect.  I think it is starting to work but I won't know unless I walk and I afraid.  Guess I will try later.  Meanwhile I got a nice warm pair of slipper socks.﻿
Posted by Pissedoffteacher at 4:10 PM

Oy! Sending good thoughts your way for a speedy recovery.

What the hell!? I could have never done it. You are one brave lady! I pray to God that is works, and you get some relief.

If the doctor you are using has a good reputation and does this all the time, you are in good hands.

Living in pain would be terrible.

What exactly did you do to your leg that's causing this pain???

Wishing you the best.