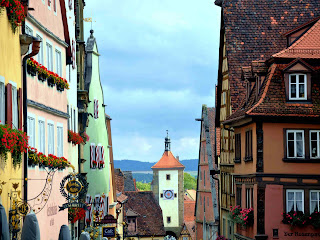 The jet lag is awful.  I guess it is age.  I never used to have such a bad reaction.
The name "Rothenburg ob der Tauber" means, in German, "Red fortress above the Tauber". This is so because the town is located on a plateau overlooking the Tauber river. As to the name "Rothenburg", some say it comes from the German words Rot (Red) and Burg(burgh, medieval fortified town), referring to the red colour of the roofs of the houses which overlook the river.   (from Wikipedia)
I'm too tired to think and write, but not to post some pictures.  If you want, check them out here, on Facebook.  I'll be putting up more as I go through them.
Posted by Pissedoffteacher at 9:29 PM

my great grandma's maiden name is Tauber but for some reason that side of the family ended up in Poland, then the Lodz Ghetto and eventually destroyed by the Nazis.

I love how, driving to Rothenberg, you drive past all those acres and acres of fields.

I was hoping you would get a chance to see that - I was there 15 years ago - and Heidelberg and Frankfurt.

Those pictures are amazing. The city looks too pretty to be real.

We saw all the fields. And, the city is too pretty for words. There are still 950 buildings standig.