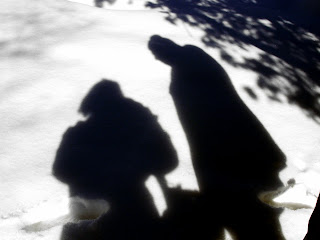 Thursday was the end of my eleventh month period of saying Kaddish for my mom. The Heavenly Tribunal judges a dead person's soul. A guilty verdict takes twelve months while acquittal takes eleven. Eleven months of Kaddish says that the soul was pure.

I'm not an overly religious person and while I do like to go to shul, I never attend as often as I should. When my mom died, I decided to honor her by saying Kaddish as often as I could. I know it is something she would have wanted me to do. She would be proud and my grandfather (her father) must be looking down, smiling on my deed.

When my mom first died, my aunt told me to send a donation to Yeshiva University so the people there could pray for her. I couldn't do that. Prayer is personal. I did not want a stranger doing my praying for me.

Attending services daily was not easy. Although making the commitment was a decision I made out of duty, it turned out to be one of the best decisions I have made in my life. Kaddish is a healing time. Attending every night gave me a chance to pray, and be alone with my thought for twenty minutes. I prayed with mostly the same people every evening, mostly very old men. We did not become close friends, but we became friends. I met my boyfriend here. I met a man who recently lost his wife, but was going on with his life, reading, attending college classes and talking to anyone who talked back. He is the one I will miss the most as I am no longer going to attend daily. (I did promise to come at least once every few weeks so we can keep in touch.)

Thursday night was the end. When the Rabbi announced the end, I started to cry. Everyone hugged me and urged me to keep attending whenever I could. It was an experience I will never forget. I never expected to be able to keep attending services for an entire year. Now a days, most people don't do this. Some of the people I know don't even bother with the week long shiva period. Kaddish may have religious significance but the spiritual healing that resulted from it was what benefited me the most. I'm glad to have the free evenings but I have been rewarded in more ways than one for doing this.
Posted by Pissedoffteacher at 8:09 PM

I give you a great deal of credit. That took a tremendous amount of self-discipline and strength, let alone energy to go to shul every evening. Your mother is not just smiling down upon you, she is grinning from ear to ear.

I hope it helped a bit in the healing process.

I'm so impressed that you not only made the commitment, but that you followed through. Clearly, those who came up with this healing process knew what they were doing.
Being alone with one's thoughts is how I view praying the rosary. It's important.

I hope you do return from time to time- you and your friends will appreciate seeing each other.