Rubber Rooms: NYC Teachers Paid To Do Nothing 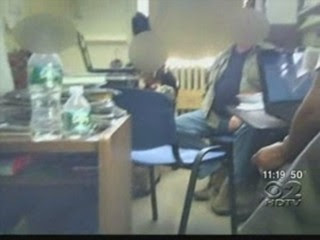 My good friend Richochet and others had no access to last night's Pablo Guzman's rubber room story. For anyone interested, the link is posted or they can just read the transcript below. For once, teachers in this situation were portrayed in a positive manner.

CBS 2 HD's cameras witnessed firsthand as teachers who were waiting to hear charges sat around in rubber rooms and literally did nothing for days, all while being paid.

Hundreds of New York City teachers removed from classrooms on a wide range of allegations are sent to offices that are called "rubber rooms."

Many stay there for years, waiting for determinations of their guilt or innocence.

But while they wait they do nothing at all. And they're still paid -- with your tax dollars.

CBS 2 HD takes you "inside … the rubber rooms."

CBS 2 HD's hidden cameras recently got a rare look inside the rooms, which are located in every borough of New York City. As many as 530 teachers are paid to do nothing while the Department of Education investigates various charges against them. Many teachers say it's a nightmare -- being forced to sit in a room all day and not teach.

"The saddest thing is that there are some people doing nothing. Not even that," teacher Leevert Holmes said.

The first teachers sent there many years ago came up with the phrase "rubber rooms" sarcastically because they said they could drive you crazy.

When asked if taxpayers are paying for this Holmes said yes, even though people are being paid to literally do nothing, adding it costs the public, "millions."

"I worked hard to be a teacher," Grace Colon said through tears. "To be an advocate for my students."

After 16 years as a teacher, Colon was sent to a rubber room. She was paid then, but last month was fired by the Department of Education for various charges, including the physical abuse of a student. She still denies the charge and is appealing.

Rubber rooms cost tax payers more than $53 million every year. Some teachers have been paid to do nothing for as long as seven years. When CBS 2 HD hasked the Department of Education about it they simply said the process is a long one.

Here's how it works: a teacher shows up for class, but is handed an envelope. Inside it reads there are allegations against you. Please go to this address. Eventually that turns out to be a rubber room like one CBS 2 HD saw on West 125th Street. But months can go by before a person finds out what the charges are against him or her, and those months can turn into years.

"I have never been, ah … received formal charges," Holmes said.

Holmes has been teaching special ed for seven years. He was put in the rubber room over a year ago and is still waiting to find out what the charges are.

When asked what it was like to walk in see other people in that room, Holmes said his first thought was, "I walked into hell."

"They want to drain us emotionally, so that we will resign," said Dr. Anna Maria Thomas, a reinstated teacher.

After 19 months of doing nothing in a rubber room, Thomas finally got charges of verbally abusing students dismissed. But she is still part of a federal suit against the city to close the rubber rooms.

"The suit says that the rubber rooms are an unconstitutional denial of due process," lawyer Joy Hochstadt said.

CBS 2 HD and the Department of Education exchanged several emails, but the Department did not want to put anyone on camera. Instead, they released the following statement:

"This is not an ideal system but, given the realities of the cumbersome state laws and union contract, we're in a position where we need to balance our obligation to safeguard children with our legal obligation for fairness to teachers," said NYC Department of Education spokeswoman Ann Forte.

Of the 530 teachers in the rubber rooms many will get fired. Some will be cleared and put back into classrooms, and others will just get frustrated and quit. Still, that's $53 million of your money that could be put to better use.

Most of the rubber room teachers are waiting to be declared guilty or innocent on charges like incompetence. By contrast, criminal cases, on arrests for things like sex with students, are often handled separately -- and faster -- by police and the district attorney's office.
Posted by Pissedoffteacher at 7:27 AM

Yahoo linked up to this story so it will get attention. But I didn't find this story as "positive" as you did because the DoE was allowed to get away with that statement blaming the unions. Why didn't they get a statement from the union???

Again, I was not impressed with the caliber of teachers interviewed for this piece, especially the one that was fired.

I am looking fwd to a media piece on teachers whose charges were found unsubstantiated because they were based upon retaliation by a principal. That to me is the bigger story since taxpayers are paying for this abuse of power.

The David Pakter piece was totally cut. I guess CBS didn't want Mr. Guzman reporting that Mr. Pakter was in the rubber room due to his delivery of rubber plants, along with all the other true absurdities of the rubber room. It was a putridly reported piece, concentrating on the fact that the teachers are still earning their full salaries while imprisoned in the rubber room. There was no inquiry as to the history of these "Reassignment Centers", or the nature of the prisoners sent there.

The David Pakter piece was totally cut. I guess CBS didn't want Mr. Guzman reporting that Mr. Pakter was in the rubber room due to his delivery of rubber plants, along with all the other true absurdities of the rubber room. It was a putridly reported piece, concentrating on the fact that the teachers are still earning their full salaries while imprisoned in the rubber room. There was no inquiry as to the history of these "Reassignment Centers", or the nature of the prisoners sent there.

Second, there are between 600 and 700 teachers in the "rubber rooms" and it costs 60 million dollars.

Finally, it was not positive but slightly negative reporting. For example why didn't the DOE put the teacher back into his school once he wa there beyond six months. Whose fault is that? The DOE's fault for not meeting the contract timelines.

Hi PO...I feel that the whole piece was butchered- leaving in only the parts that would enrage the tax payers. They kept stressing how long the teachers were there- doing 'nothing' all day on 'your tax dollars'. Who's fault is that? There was no mention as to why the teachers were there sooooo long...no reference to the violation of due process or the lack of arbitrators to hear the cases...

I guess I didn't look at it that way. I didn't feel the teachers were being blamed at all. I know things could have been done differently, but it seemed to be the best piece I have seen.

Thank you for posting the transcript. The title of your post is what will stay in the viewers minds when they forgotten everything else: We are being paid to do nothing. Therefore, this piece was hurtful to teachers in the Rubber Room and to all NYC teachers. We want our message to be: Bloomberg is framing teachers for what they didn't do, engaging in character assassination, in order to divert millions of taxpayer dollars into the hands of his rich friends.

I suggest that we start our own on-line news station. See http://untamedteacher.blogspot.com/2010/01/build-it-and-they-will-come-our-own.html

Tell me what you think.

Teachers who are in the rubber room are there for a reason. Like that teacher who was fired for the physical abuse of a student, yet she has the nerve to state she is an advocate for students. What a JOKE! She was being paid for God knows how long and now is terminated. She should have been terminated the incident happened.

And almost 3 years later, some minor changes and we are back at it in front of everyone's eyes.
http://protectportelos.wordpress.com/rubber-room-journal/