I'll Pay, Its Worth The Cost 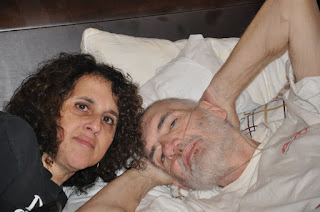 I never got to spend quantity time with Mike, him living in Houston, me living in New York, but the time we had together was unadulterated quality, from the long phone calls to the few short visits, they were quality all the way.

Mike was a charmer. No one expected my parents to approve of him as a spouse for my sister because he wasn’t Jewish, but after one short meeting with him, my parents who are extremely cautious shoppers were sold. For them, it was love at first sight. And, me, the cynical one was sold just as quickly.

The first time I ever spent any real time with Mike was when he had a business trip to New York. He managed to sneak away, I didn’t have to work, and I got to play tour guide in the city I love the most.

I met him in the lobby of his hotel, the Sheraton on 54th and 7th. I had never been in that place before so until that day I did not know about the great, available bathrooms in their first floor lobby. Anyone who has been in Manhattan knows it is not easy to find accessible, clean facilities here. I always think about Mike as I go about my business there.

Mike told me he wanted to go to a museum and since the MOMA is right there, I decided that was the place to go. He bitched and moaned about the five block walk and told me “Texans don’t walk.” I just told him “NYers do.” He shut up and walked. I will never forget his face as we past the Jackson Pollock painting. I never understood Pollock and don’t even really like his work and was thrilled to find someone who could might be able to explain it to me. He couldn't explain it but just stared at it in awe.

After the museum, Mike and I took the subway down to the Second Avenue Deli where he finally got to taste his first NYC kosher corned beef sandwich. He never forgot the taste of it and for years after he mentioned the food whenever we talked. I’m glad that I made the trip to see him a few weeks ago and brought him some NY corned beef. I loved watching the delight on his face as he ate every bite and I even forgave him for requesting a glass of milk to have with it.

My sister used to get mad when I called and she wasn’t around because Mike and I spent long periods on the phone, me telling him of my NYC adventures, him getting jealous and enjoying them all the same.

The last time Mike an I were together, we spent hours looking at art on the internet and reminiscing about our days together. I’m sitting on the plane right now, on the way to the Jewish memorial service of my crazy, loving Irish Lutheran brother-in-law. My dad is watching television on one side of me and my husband is napping on the other. My nieces, with their husbands and children will be present. Mike’s good friends will be there. We are going to honor and remember his life, which was cut way too short. Some of the things I will say are written here. Some of the things I will write next will never be said. The pain my sister is feeling is too great to subject her to some of my really dark feelings.

Mike and my sister lived stupidly. They didn’t have health coverage or even decent jobs. They always looked for jobs that fulfilled them and those kind of jobs weren’t usually available and if they were, they didn’t come with what they needed. I keep thinking that if they had those jobs, I might not be on this plane today. His cancer might have been caught earlier if only he had the money to go to a doctor to get screened. His treatments might have started earlier if only he had health coverage and did not have to wait three months to get into a free program. If only they weren’t to self righteous and went to some free clinics when they couldn’t afford to pay, I might be at work now instead of sitting where I am.

And now it looks like Obama’s health plan policy will not pass. No one wants to pay more taxes to provide for this for the uncovered. People are afraid their own benefits will decrease. Speaking as a hard working, tax paying American, I say, raise my taxes if this is the only way to provide care for everyone. I’m thankful to have a job that allows me to pay taxes. If paying more taxes means some other family will not be doing what I am doing now, that is fine with me. I’ll give up some dinners out, a new outfit, even a trip, if it means saving a life.
Posted by Pissedoffteacher at 6:07 PM

Words can never say enough. My heart goes out to you and your family for this loss.