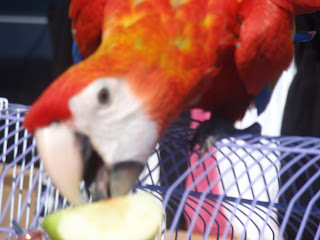 NOTE: THIS IS A SPOOF ON THE REAL SITUATION

There is an interim acting chairperson in the language department of Big City High School. This chairperson has never taught any foreign language and even lacks some of the basic skills necessary to communicate in English. This guy has taught before, but his license is in physical education and he has no concept as to what should be going on in an academic class.

Things are not going smoothly with this guy in charge. Kids in French classes are being given Spanish tests and Chinese language kids are taking tests in Russian. Italian teachers are being told they have to teach Korean and the Korean teacher has been assigned to translate for anyone who needs a translator. There is even a class of hearing impaired students, taking a signed language class from a tape.

The interim acting chairperson is smart enough to know he can't do it alone. He formed a committee of experienced teachers and talks constantly about "picking" their brains. He also passes off their work taking their work as his own, yet he is still not competent enough to do the job properly.

Needless to say, the students and the teachers at Big City High School are not happy. A girl studying Russian was in tears when this guy screamed at her for not being able to answer an exam that was written in Greek. The German teacher had a meltdown when she was told she had to teach Hebrew. I could go on and on with the stories I've been told, but I am sure you get my point.

The guy I am talking about is young and very good looking. While some think he is not too bright, I know he is is right on target when it comes to looking out for himself. All the little peons who have worked with him this year are praying he doesn't get the job permanently.
Posted by Pissedoffteacher at 6:48 AM

This isnt the only place stories like this are happening. Believe me! There are many people who pick other peoles brain and use thier knowledge as their own.

Where's your chapter leader? Why isn't your chapter leader doing something about this? If he/she is going to make the Italian teachers teach Korean, then this interim-acting incompetent administrator should be taking calculus or AP English or AP History. Throw the ball in his court. Tell your colleagues that Mr. Pretty Boy must model a lesson so others can see how it's done.


This system is going down the toilet!

Their's a brain-picking epidemic going on in some schools. The brain picked teachers should be earning some kind of compensation. Not only is their work but also their ideas are being stolen all the time and passed off as the administrator's, even if the admin is a woefully inadequate choice. The admin "NEEDS" the assistance of these knowledgeable (and veteran) teachers but will no doubt throw them under a bus at the earliest opportunity.

Didn't you once have a real good foreign language AP who was removed because he refused Mr. Suit's instructions to give a teacher he didn't like t a "U" rating?

I never understood when PE teachers became principals or even superintendents. The same thing goes for the Leadership Academy who are hiring people who have no background in teaching.

Would a corporation hire a Marketing VP who didn't have a sales or marketing background? Or a CFO who did not know corporate finance? Yet lawyers are running the school system????

These "committees" should keep minutes so when some asshole tries to take credit, they have proof where these great suggestions came from.

In case anyone has any dobut, the situation described is fictional, but based on fact.

FACT--a Brooklyn school district was once run by a former PE teacher.

You have got to be kidding me!!

How can the AP assign teachers to classes they aren't certified to teach?

I'm surprised the parents aren't up-in-arms about their kids being in the wrong class or taking the wrong tests. (Given that it's usually smart kids with involved parents who get to take a language.)

Phys Ed teachers have several qualifications for moving up to administration:

1. They are used to managing large groups of unruly peons and somehow looking they are actually doing something themselves.
2. They don't take piles of marking home with them so they have time to work on their graduate degrees.
3. They know how to schmooze well, working those social networking abs and pecs.

Any other questions? If I gave you $100 for each administrator you could find with a purely academic background, and you gave me $100 for each one who had PE or some elective background, guess who would end up owing whom?