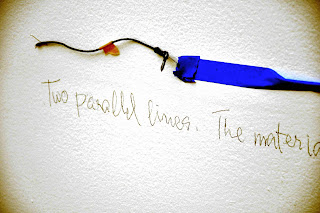 It's been forever since I had a day to enjoy the city so last Sunday we took off to the MOMA.  There was an exhibit on the modern kitchen that I wanted to see plus a few more.  One of my favorite ones was On Line.  My husband thought it would be computer related but it was about shapes and lines, very mathematical.  Why an electrical chord hanging on a wall is considered art is beyond me, but I enjoyed it anyway.

It would be nice to take a class trip to one of these museums so the kids could see the connection between math and art.

No photo taking was permitted in this exhibit, but I took some notes so I could remember what I saw.  This was one of my favorite quotes.

Marcel Duchamp: It  is “a joke about the meter,” Duchamp glibly remarked about this piece, but his premise for it reads like a theorem: “If a straight horizontal thread one meter long falls from a height of one meter onto a horizontal plane twisting as it pleases [it] creates a new image of the unit of length.” Duchamp dropped three meter-long strings from the height of one meter (about three feet) onto three stretched canvases then fixed the strings to the canvases in the random curves they had formed on landing. He cut the canvases along the string lines, creating templates for new units of measure that retain the length of the meter but undermine its rational basis.


More pictures (not of this exhibit and some photos of 5th Ave posted on facebook.)
Posted by Pissedoffteacher at 7:47 PM