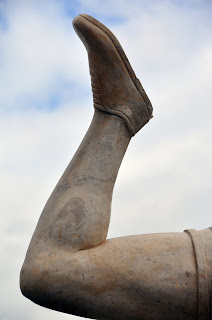 ﻿
Mr. Talk posted anti-union teacher Matt Polazzo e-mail  response to the article Accountable Talk wrote blasting Polazzo for the things he wrote in the News and for the coveted spot he got his daughter in a desirable Eva Moskowitz charter school.  Mr. Talk promised to be "good" and he was.  Polazzo claims he won't read or respond to any comments but I find that hard to believe.  He might not admit to it, but I am willing to bet he is following through on all commentaries.

I won't bother with most of the rubbish.  Mr. Talk has handled that stuff extremely well in a previous posting, but I take exception to this:

Things weren't as bad in 1960 when a high school diploma could still get you a fairly decent gig. But globalization and automation have ended the era of low wage manufacturing jobs. The only reliable path out of impoverishment is education. I agree that parents are often the main issue here--I used to walk down 182nd Street at 11pm on a weeknight and all my sixth grade kids were hanging out. Their parents were good people who really did value education, but only in the abstract. Still, at school the kids who had good teachers were still capable of achieving great things. But the ones in the class with the teacher who called them "a bunch of disgusting animals" failed to thrive.

No teacher should ever call kids "a bunch of disgusting animals" and I don't believe this happened very often.   But the important thing he is missing is that in 1960 a high school diploma meant something.  Graudation meant being in school and passing exams.  There was no seat time or credit recovery classes.  Failure was a real option.  Kids who failed could repeat a class or they could drop out.  But the ones that stuck with it, even if they only ended up with a general diploma were prepared for life.  They knew how to read and do basic arithmetic.  They could wrtie a check and pay a bill.  They knew the proper way to dress for work and they knew that if they wanted a paycheck to keep coming they had to show up every day and do what the boss wanted them to do.  They got this discipline in school.  Sure there might not be many manufacturing jobs around now, but not everyone is meant to go to college.  Society still needs car emchanics and coffee makers and street cleaners.  Today's diploma, that piece of paper that every principal looks for ways to give away prepares kids for nothing and that is the reason things weren't as bad in 1960.