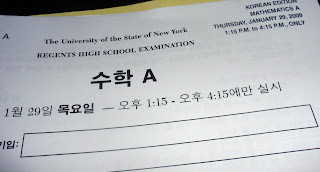 We had another Dinger a few weeks ago. These nights are the best--the opportunity to be with friends that "grew up" together. (Grew up in the teaching profession.) T and I are the only ones still working full time for the DOE. T is an administrator. I know, it is hard to believe that I am friends with an administrator but he is a good guy. T is the only administrator (actually there is one more that I will get to later on) that I break bread with.
The first thing my friends all asked me was how school was going and if I was ready to retire. I told them no retirement this year and then I told them about our new principal and how he didn't hate me yet. They are betting that will happen soon (they expect me to live up to my reputation) and are starting a pool.

Dinger is our group social director. He told everyone we were going to one restaurant and then made the reservations at another. Luckily his wife sent out an e-mail with the correct place in it and we all showed up at Piccola Venezia, in Astoria. The food and service was good and the company was excellent. For the first time ever, Dinger left his graphing calculator home and had no "dot" questions for me. He did call me earlier in the week and ask me to bring him copies of the regents that were given in January. I brought him copies in Spanish, Chinese and Korean. We all got a good laugh out of watching his reaction.

L and his wife were there. L was always one of my favorite people. He used to say and get away with the most outlandish things, things that would put him in a rubber room today. The kids loved him and he was considered one of the best teachers around. L was our chapter leader for years. His wife is the other administrator I break bread with but considering she is married to a former chapter chairman, she is forgiven.

O is the one who helped me find my house. When he found out we were looking, he recommended the agent and the area we bought in. It was the best thing that ever happened to us. We were two dumb kids from the Bronx who had no idea about anything in suburbia. Thank goodness he steered us to Queens. I would never have been happy anywhere in Long Island. I still remember O's daughter throwing up all over my new carpeting in my new house. Now this daughter is the mother of four children.

As a newbie, C was my idol. She was so smart and so pretty (still is) . She had a great apartment on the West Side and the kind of life I aspired to. She had a French background and spoke the language fluently. But, she was not one of those snobby French people. She was totally down to earth.

E is my closest friend from that group. She and her husband live around the corner from us. She is the sister I wish I had.
P was my mentor when I first started teaching. If it wasn't for him, I would never have survived more than a few days. He is still trying (unsuccessfully) to convince me that I cannot save the world.

I love the 'pool' they have started. I am no where near retirement :(, but I too take very little time to rub an administrator the wrong way! It's not me, it's them :) Come visit sometime.