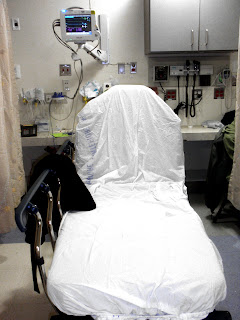 My heart is hardening to my dad's tears. I can't survive any other way and luckily the tears are not coming as frequently and as hard as they used to.

The second anniversary of my mom's death is approaching and my dad is starting to have some bad days again. I called yesterday at 4:30 and he could barely talk. I offered to go over but he did not want company. An hour later, the phone rang again. "Rita, I need you." I told him I would be there within a half hour, traffic permitting. "Bring S", he said before hanging up. This scared me because I usually go alone. My dad finally was able to say he was having trouble breathing and needed to go to the ER. He wanted my husband along so I wouldn't have to worry about parking.

We flew out of the house. Just when I needed to make time, the Cross Island and the New England were both backed up. We made it in 30 minutes anyways. My dad was able to make it to the street on his own and we headed for Einstein, the hospital his cardiologist is connected to.

My dad was surprisingly calm on the way there. Only once did he tell me where the key to the safe deposit box was located and where to find his money.

The ER triage team took him quickly. They tested his pulse, blood pressure and oxygen level and I knew he was going to be fine because he did not get hooked up to any machines. In fact, they did not even give him a gown. Little by little his color returned.

We did wait a long time for an ER nurse, but that was due to a change of shifts. As soon as the night nurses came on, the sweetest young man (with a strong Jamaican accent, so of course I was hooked) came over. He took blood and asked some questions. The doctor arrived next. He checked my dad out, ordered an x-ray and said if everything was fine we could take him home.

I will love this doctor forever. He got us a quick x-ray, fast blood test results and released us to be home by 9:30 PM.

My dad was suffering from anxiety, nothing more but very scary. My heart is hardened to his tears but not to his pain. I will never let him suffer alone. I will never let him be alone. Growing up, there was nothing he would not do for me and my sister. Now there is nothing I will not do for him. I accept that no one lives forever and that he is 84 years old. I accept that there will come a time when I must say goodbye to him but not yet. That ride to the Bronx and the ride to the hospital scared all of us. I am grateful that I am able to write this now and know that he is safe and sound, happily watching television in his own apartment.
Posted by Pissedoffteacher at 3:36 PM

I am sorry for the difficult time you and your father and husband suffered recently. He is so very blessed to have you, and so close by.

As a fellow anxiety sufferer, I can relate. :)

Glad to hear your dad's OK and that you were able to be there for him.

Thank G-d he's ok, you're a wonderful daughter and you are lucky to have each other.

my prayers are with you & your family. -ES

I went through a lot with my dad and mom for the last few years. Thankfully, his suffering from Alzheimer's ended in Sept, but I am still up almost as much helping my mom with varied heart things. You are in my thoughts and prayers...
take care of yourself, too.

He is very lucky to have you as his daughter. I know this is a tough time to go through. My thoughts are with you.

Thanks for all the nice thoughts.

I'm lucky to have him as my dad.

Your love for you family inspires me.