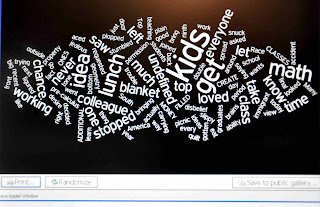 A few weeks ago, I went to a professional development session at discoveryeducation.com. I had a great day, but with everything good, there comes bad and today that bad happened. I had to present a workshop on what I learned. Anyone who knows me (or reads this blog) knows how I feel about PD, so the idea of me sitting in front of a room and doing the talking put my stomach in knots. To top off my butterflies, I only sat through one three hour session which, with breaks and starting late probably only lasted two hours so I am as far from qualified as possible. But payback is a bitch, so I reluctantly paid back and did as good as job as possible. I hoped the people showing up would not expect much so they would not be disappointed.


I opened the session by telling them to read the weekly bulletin, including attachments. I found out about the PD there and they could do the same. I showed them the some of the Web 2.0 gimmick they could use, taught them how to blabberize and how to make an avatar. I showed them photopeach and wordle and the cute things I was able to make with both. If I say so myself, the slide show of the boy's baseball team that I set to music was great.

It is now evening. I survived my first ever presentation on a PD day. It wasn't as bad as I thought it would be and most people said they got something out of it. I hope they just weren't being nice and meant what they said.

Posted by Pissedoffteacher at 9:39 PM