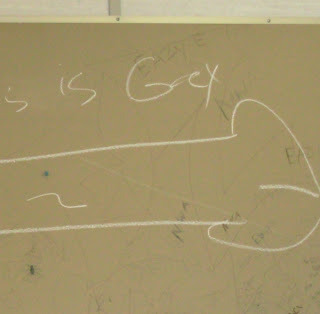 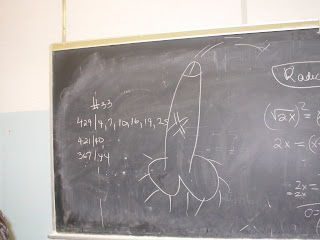 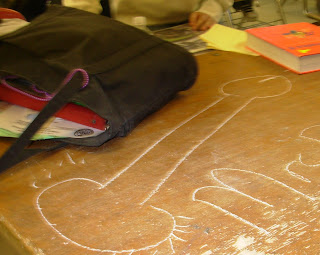 These pictures greeted my class this morning. The teacher mentioned shares the trailer with me.

I called the dean's office when I saw the pictures. No one was in yet. I called the APO. She came out and was visibly upset. She brought back paper to cover the offensive drawings and then had the custodians come out to remove them. I told her that I took pictures, as did one of the kids in the class. I just e-mailed them to her.

Later in the day, we had a departmental meeting. My AP is furious that I have been complaining about security. He said he was "friends" with the security and now they were mad at him because of my complaints. He said he would solve the problem by not letting me teach in the trailer anymore. He would put a man out there who can handle things better. Tomorrow I am going to file an EEO complaint about that comment.

I am not going to let this issue of security rest. It is too important. I will not be made a scapegoat for the school's problems. If I decide to leave, I will leave kicking and screaming and exposing as many of the problems as I can. If I go, this blog will no longer be anonymous. It will name the school and all its participants.

I'M MAD AS HELL AND I AM NOT GOING TO TAKE IT ANYMORE!
Posted by Pissedoffteacher at 3:45 PM

OMG! You have pictures like this and a student with a smashed face and tons of other incidences, and he tells you that you're the problem? That a man can better handle the situation? And he's mad that security is mad at him? Unbelievable. I hope your complaint is taken seriously and this dirtbag is dealt with. I cannot believe this situation. Would those drawings and words be less offensive if they were directed to a man? This AP is a joke. Increíble.

That's so horrible and ridiculous! Does another student need to be seriously injured before the AP does something? Or do several students need to be injured? Or will the next incident have to go beyond just offensive sexual harrassment? When schools are so unsafe it's no wonder students wont' want to go and teachers won't want to work there! Kudos for trying your best to bring some light to the issues and address the problems!

I would say that's incredible, but I know that it's not. At least you know that you have a clear conscience, that you addressed the abysmal security issues in your school, and that, above all, YOU can't be blamed.

I understand how you would like to expose everything and everyone at your school. Just remember that you never want to be accused of slander.

It's another beautiful day in Mr. Bloomberg's neighborhood.

You have to do what it takes to solve this situation. This is so offenseive and crazy. I can't imagine who would want to do this to an place of learning.

What a wonderful sight to see. Those little angels that are so misunderstood. All they need is love, attention, and guidance. Yeah right! What they really need is a good kick in the butt. Oops there's that corporal punishment problem again.

Just think only two more months to go for you. Stay the course.

Mr. Weasel AP needs to get HIS mouth bashed in for real....he's the only one who deserves it!! He claims YOU'RE the problem? Someone needs to give him a mirror and remind him of who he is.....an abusive inappropriate sexist and previously racist little shit who is lucky he's had the job he has this long....his time has passed.

Gee, sounds like retired APO Muscle Beach who would only assign men to cafeteria duty because " woman couldn't handle it". They will put some newbie in the trailer who might be afraid to be out there but would also be afraid of not getting tenure or being excessed and therefore will keep quiet.

Holy cannoli. I thought I had it bad when one of my precious cherubs wrote my name down on a list of people he wanted to kill, and then was allowed in my classroom. At least the admin didn't accuse me of whining and complaining.

It looks, however, as though you won the war, if not the battle. I doff my wig.