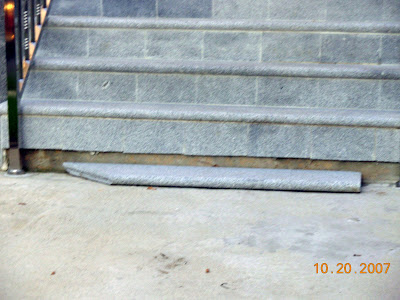 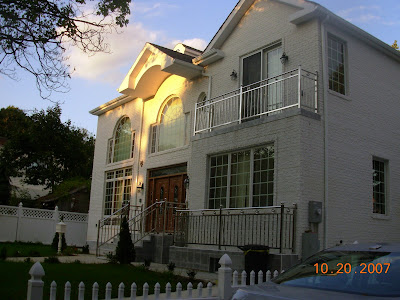 A few months ago I wrote about the nightmare of living next door to a McMansion in the process of being built. Since my neighbors aren't home at the moment, I decided to go take a few pictures to share. Look carefully at the front steps and notice the slab of marble laying in front because the step was built too high. It just lays there, obviously a discard from the rest of the construction. Hope these pictures are enjoyable to all looking at them. To me, they are just sad. 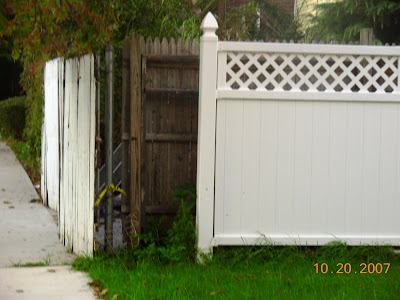 The new fence does not go all the way to the end of the property and the rickety old fence next door is visible in the front of their house. 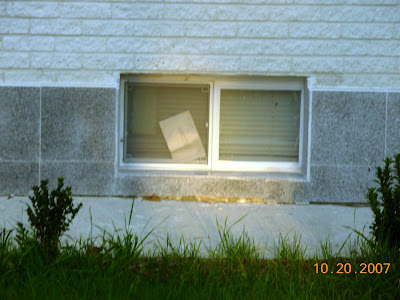 The marble does not go all the way to the ground. The house has cracks near the foundation. I bet it floods whenever it rains. 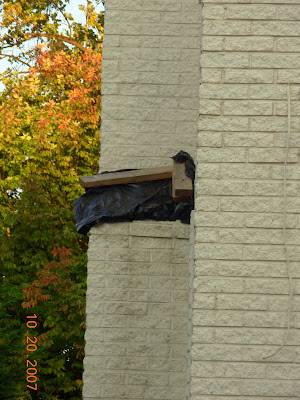 The roof is leaking. Notice the plastic bags on the chimney, being held down with two by fours. Don't know why they dug this channel in the ground. It is still unfinished. 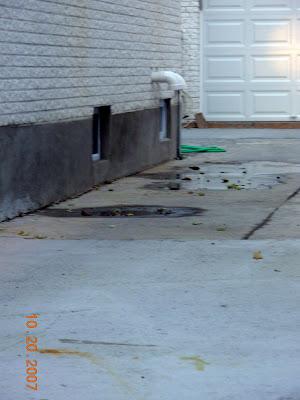 The driveway has big puddles whenever it rains. The cement was poured at different times and does not match. There are also cracks in it. 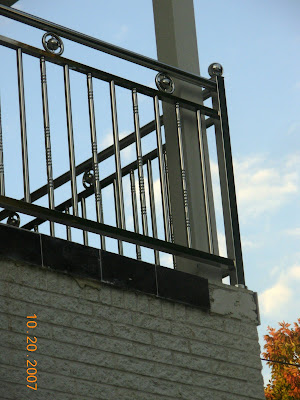 The marble fell off the bottom of the terrace at least three months ago. 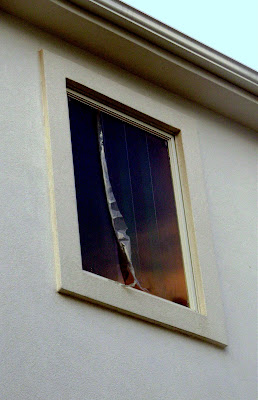 Windows are still covered with plastic. 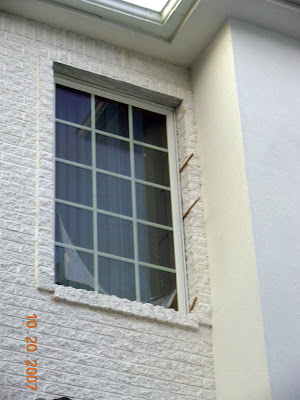 Windows are still being held in place with wood sticks. 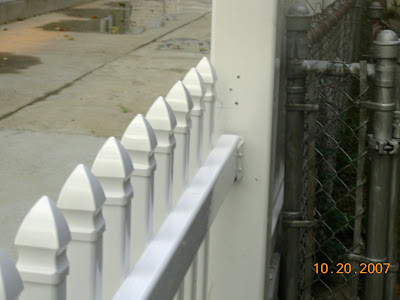 The fence had the holes drilled wrong. 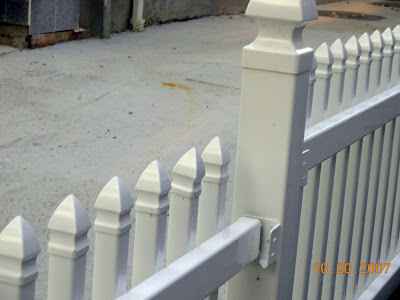 The wrong brackets were used. They do not fit.
The house that was destroyed was a beautiful English tudor, built in the late 1920's. It had been well cared for. There were new windows. There was a new kitchen. There was a pond and a waterfall in the backyard. The house standing there is out of character with the neighborhood and is out of character with any new million dollar structures. I don't know what these people could have been thinking when they had it built. My guess is that they were not thinking at all.
Posted by Pissedoffteacher at 5:47 PM

That's pretty scary....I think we just found you a new career when you retire: House inspector! You clearly have a good eye for detail. If I ever build a house (I would never do one as hideous as this one) I'll hire you to keep an eye on the contractors!!

Keep up all your posts, it's good to see my ideas about school reflected through your eyes as well.

What a shame, but it's indicative of what's going on in society as a whole....out with the old, in with the new. Quality is just not an issue, it's quantity and newness. As a matter of fact, it's just like the DOE except whoever built the house probably went one step further and used immigrants sans papers as the construction "help". One day, KleinBloom may have to go to the same corners to pick up their educational "help" as we are reduced to mere workers, not educators. There are real builders,then there are just laborers. I hope this analogy isn't too far off my meaning.... :)

Did I forget to mention that both your neighborhood McMansion and the DOE could be referred to as "a house of cards"?

Both of them are made with inferior materials.

YUCK!
I can just imagine how wonderful the old house was. I live in an historic neighborhood- I would die if something like that was built.
And that "fence" is plastic!!!

I liked the house before they built the huge one....